Zen and the Red Dakini 3 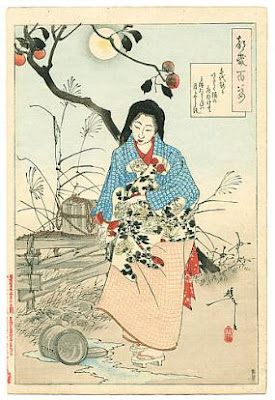 Continued from Zen and the Red Dakini 2

One of the most fascinating stories of enlightenment comes from Japan – that of Zen master Chiyono. Incidentally Chiyono, it is said, is the first Japanese woman to be enlightened through Zen.

Chiyono, also known less commonly as Mugai Nyodai, was an incredibly beautiful woman when she decided to devote her life to Zen and became a bhikshuni. A story tells us that she was so beautiful that monasteries one after the other refused to admit her. The chief monks of the monasteries were afraid that if Chiyono became a bhikshuni, the monks in the ashram would be tempted by her beauty and would forget all about Zen and instead fall in love with her.

When Chiyono realized that no master would take her as an inmate of his monastery because of her beauty, she did an amazing thing. In her eagerness for Zen, to be accepted as a disciple and allowed to live in the monastery to practice Zen, she burned her face with fire. She got so badly scarred that now it was difficult to make out she was a woman.

Chiyono has been the subject of many paintings and statues, portraying her either as extremely beautiful or as extremely ugly. We can see her face in one of the statues made in the thirteenth century, while she was in all probability still alive [she died in 1298], and looking at it, it is really difficult to believe she is a woman.

After scarring her face, she approached the great Chinese Zen master Wuxue Zuyuan, who had in his later years come to Japan and was popularly known in Japan as Bukko Kokushi, or Bukko Engarku, or simply as Bukko. He accepted her as his disciple.

Her guru was a couple of years younger to her.

It is said that Chiyono studied Zen under Bukko for several years but was still unable to attain the fruits of meditation, even as the boy in Paulo Coelho’s story was unable to hear temple bells ringing under the sea.

Because enlightenment happens to you on its own, and it is not something that you can make happen.

In a way enlightenment is like sleep. So long as you are struggling to fall asleep, you cannot sleep. And when you give up, sleep happens on its own.

There is no way we can make sleep happen. It has to happen on its own.

There is no way we can make enlightenment happen. It has to happen on its own.

Each experience of enlightenment is unique. Because each one of us unique.

That night Chiyono was carrying water in an old pail bound with bamboo. All on a sudden, the bamboo broke and the bottom fell out of the pail, and at that moment Chiyono was enlightened!

It is a Japanese custom to write a poem in commemoration of your awakening. Here is the poem that Chiyono wrote:

“In this way and that I tried to save the old pail
Since the bamboo strip was weakening and about to break
Until at last the bottom fell out.

No more water in the Pail!
No more moon in the water!”

For Chiyono, the world disappeared. And there was only the reality left.

When the mind disappears, the world disappears. The world that is perceived as the other, as the object of perception. Leaving only the perceiver behind.

This is the state Vedanta calls advaita – non-duality.

“There is no Ignorance other than the mind. Mind itself is Ignorance, which is the cause of bondage. When it is lost, everything is lost; and when it is manifest, everything comes into being. In a dream, which is without true substance, it is the mind alone using its own power that brings into existence the entire universe of the dreamer. It is no different when we are awake. Everything that we see around us is nothing but a projection of the mind.”

So long as the mind is, everything is. And when the mind has ceased to be, everything disappears, leaving behind only the reality that is beyond the mind.

When the pail is broken, the reflection of the moon disappears. What is left is the original moon alone.

Chiyono realized this when the pail broke and the reflection in water disappeared.

It was a spontaneous experience to her. Something that happened when she least expected it.

Which is to say if we break a pail and watch the reflection disappearing, there is no chance it will happen to us. Because then it will be a contrived trick.

Had it been otherwise, it all would have been so easy. All you need is a pail of water and a moonlit night!

Tricks do not awaken us into reality.

Our mind has to be ready.

Chiyono has been preparing her mind, just as the boy in the Manual of the Warrior of Light had been waiting for a long, long time.

And then it happened.

The Kathopanishad puts it beautifully when it says:

“This Self cannot be attained through lectures on it,
Nor can it be reached through intelligence or by great learning;
It is attained by him whom It chooses,
To him, this Self reveals its body.”

The Self reveals itself only to him whom it chooses.

Truth is like a coy bride who reveals her body only to the one she chooses for herself.

There are several other stories of sudden enlightenment from Zen. One of them is of the master Kyogen. Here is Osho speaking about his enlightenment.

“Kyogen was a scholar of great learning, and for some time, this stood in the way of his enlightenment. One day Isan asked Kyogen,”When you were with our teacher, Hyakujo, you were clever enough to give ten answers to a single question, and hundreds of answers to ten questions. Tell me this: what is your real self – the self that existed before you came out of your mother’s womb, before you knew east from west?”

At this question, Kyogen was stupefied and did not know what to say. He racked his brains and offered all sorts of answers, but Isan brushed them aside.

At last Kyogen said, ”I beg you, please explain it to me.”

Isan replied, ”what I say belongs to my own understanding. How can that benefit your mind’s eye?”

Kyogen went through all his books and the notes he had made on authorities of every school, but could find no words to use as an answer to Isan’s question. Sighing to himself, he said, ”You cannot fill an empty stomach with paintings of rice cakes.” He then burned all his books and papers, saying, ”I will give up the study of Buddhism. I will remain a rice-gruel monk for the rest of my life and avoid torturing my mind.”

He left Isan sadly and took on the self-appointed job of grave-keeper. One day, when he was sweeping the ground, a stone struck a bamboo. Kyogen stood speechless, forgetting himself for a while. Then, suddenly, bursting into loud laughter, he became enlightened.

Returning to his hut, Kyogen performed the ceremony of purification, offered incense, paid homage to his teacher, Isan, and with the deepest sense of gratitude said, ”Great master, thank you! Your kindness to me is greater even then that of my parents. If you had explained the profound cause to me when I begged you to give me an answer, I should never have reached where I stand today.”

A series of short articles on the Bhagavad Gita for people living and working in our volatile, uncertain, complex and ambiguous times ... 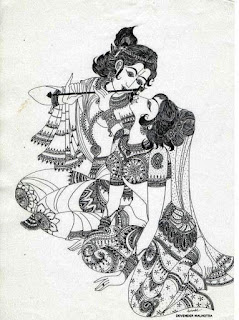 Satya Chaitanya
A direct disciple of HH Swami Chinmayanandaji and HH Swami Dayananda Saraswatiji and direct grand-disciple of Bhagavan Sri Ramana Maharshi, Prof Satya Chaitanya has been a lifelong student and teacher of the wisdom of the Upanishads and the Bhagavad Gita. He has spent several years in the Sandeepany gurukula in Mumbai and in ashrams in other parts of the country including the Himalayas studying timeless Eastern wisdom. Prof. Chaitanya is an educator and corporate trainer with over 30 years of experience and has offered programmes to IAS, IPS, IFS and IRS officers, scientists, corporate executives, businessmen, doctors, engineers, college professors, school teachers, and entrepreneurs. He is a specialist in Leadership Training, Stress Management, Achievement Motivation, Performance Excellence, Emotional Intelligence, Interpersonal Relations, Communication and so on. He has been associated with XLRI Jamshedpur, XIMR Mumbai, XIM Bhubaneswar, Tata Management Development Centers and CII as a visiting faculty. Prof Chaitanya has been a practitioner and teacher of meditation for several decades. Email: chaitanyasati@gmail.com; Mob: 9470357129